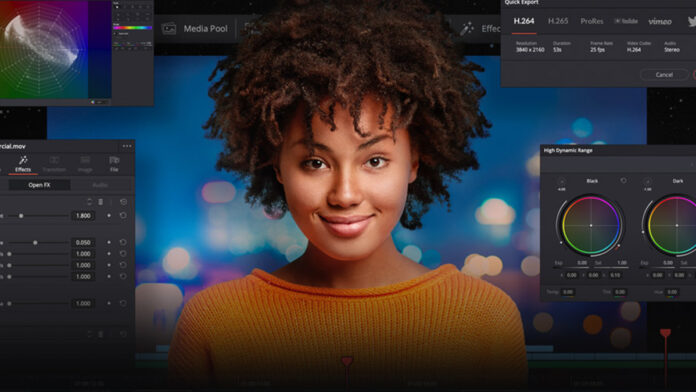 In the modern era, we have come beyond just text content. With the development of visual technology and videography, various media files like video, audio, and images are being presented to achieve various goals. However, sometimes these media files need to be edited, reshaped, or blended to present in the best way. We are aware of a lot of audio and video editing tools that can meet our requirements. But, we will have to say that still, those are limited. Then what? Is there a better solution? Yes, there is and not just a solution to one particular format of media but an all-in-one software and tool that enables you to do a lot of things.

That amazing tool is  DaVinci Resolve which is exactly that is used by Hollywood professionals for feature films. DaVinci Resolve 17 is a perfect tool that lets you deal with a media file in every possible way. It allows you to do everything from video editing to color grading to compositing, audio mixing, and sound design. However, still, its beta version is available.

DaVinci Resolve is a color correction and NLE (Non-Linear video editing) application for Windows, macOS, and Linux. Probably it is the world’s only solution that combines editing, color correction, visual effects, motion graphics, and audio post-production all in one software tool. Originally, the software was developed by da Vinci Systems in 2004 and it used to be known as da Vinci Resolve. However, in 2009, Blackmagic Design acquired this tool and since then they are developing and releasing it with continuous approved features. The latest and stable release of this all-in-one tool was made in September 2020.

Read Also: MiniTool MovieMaker A Free and Simple To Use MovieMaker

Initially, there was a commercial version available of this software, however, Blackmagic Design released its free version as well with limited functionality. You need to learn multiple apps to reshape your media instead this one app does all that you want to do. While the best of all is that by learning DaVinci Resolve, you are learning how to use the exact same tools used by Hollywood professionals.

As mentioned earlier, this software allows you to forget all other editing software and you do not need to learn several applications. Instead this tool enables you to deal with original camera video in every possible way. The following are the features of this amazing software.

What is the new in DaVinci Resolve 17?

In the latest version of DaVinci Resolve over 100 new features and 200 improvements are added. Each page has been revised with some powerful features. The following are the new things in the new edition of this software.

New additions in the Color Page

If we say that the new version, DaVinci Resolve 17 is incredible for colorists because of its new creative tool then it would not be wrong. The following new features are added to Color Page.

New additions in the Fairlight Page

Major and important updates are made for audio editing on the Fairlight page of DaVinci Resolve 17. Now you can say that it is the world’s fastest and highest quality solution for audio post-production. The following are the new updates.

Well, the cut page has now been made smarter with the exciting new features that can help you to finish the projects faster. The following new things have been added to the cut page.

DaVinci Resolve 17 has now dozens of new features in its Edit Page that can save your time while working on the projects. The workflow has been improved dramatically with the following new additions.

DaVinci Resolve 17 enables its users to add visuals, filters, and motion graphics in a simple and easy way. The following new additions have been made to Fusion Page.

Pros and Cons of DaVinci Reslove 17

Though this software has a lot to offer yet there some of its cons too. The below are the pros and cons of this amazing software.

Well, right now the beta version of the software is available that can be downloaded quite free of cost by anyone. However, there are not many details on when its final version will be available. It is also worth mentioning that DaVinci Resolve Studio 17 is available for $305 with dozens of features as well as a neural engine, machine learning, and artificial engine.

Do you want to download DaVinci Resolve 17 now? Well, if your answer is yes then follow the following step to download the free version of this amazing software.

Step 1: First of all, click the official download page from Blackmagic Design. The following screen will appear.

Step 2: Click on the relevant operating system you have and then it will ask to fill a form as shown in the below image and click Register and Download button.

Once the file is downloaded, extract the setup file and install it following the installation instructions.

DaVinci Resolve 17 is the world’s best all-in-one software to edit your media projects like feature films, TV shows, and documentaries, etc. IT offers you everything from video editing to color grading to compositing and audio mixing and sound design. This software can make you forget all others and learn exactly what is being done in Hollywood. Be with us for more updates and the latest news.

Are you using Google Photos to store your media...
Read more
Previous articleTop 10 PS5 Games You Must Play
Next articleHow To Convert MKV To MP4 using VLC For Free?
Top10 Editorhttp://Top10.Digital