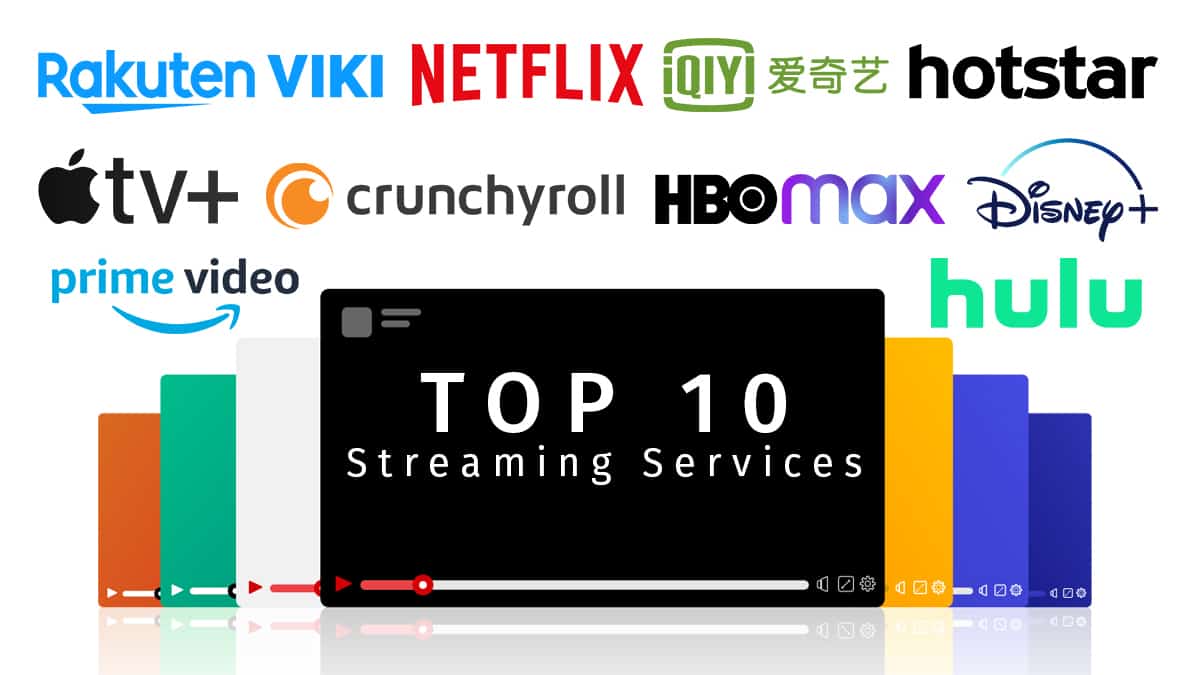 Streaming service began as a DVD add-on and digital download dealt for movies and TV shows. They were supplements to the programs you saw on cable TV. But the fastest Internet connections and an abundance of video streaming devices have accelerated the decline of traditional cable. More and more viewers cut the cord entirely in favor of alternative dedicated streaming. Further, the number of video streaming apps increased, making you more confused. That’s why TOP10.DIGITAL has decided to compile a list of Top 10 Video Streaming Services in 2020.

However, entertainment and technology giants are not blind to the threat, and the media landscape is changing rapidly. Consolidation and curation (that is creating their special web series and movies) appear to be the primary objectives of the streaming services involved in this.

Although you may not be at the same physical location as your friends and family, you can still watch the same shows together. So, now let us start with the Top 10 Video Streaming Services in 2020.

Netflix is one of the amazing in top 10 video streaming services in 2020. It has a vast collection of original shows and quality of television hits and family favourites. It also offers offline downloads for mobile devices, stream without any ads across all devices and convenient features such as Smart Downloads. Consequently, its price has increased over the years. Further, there are a lot more streaming options available at lower prices.

If you want to get streaming service, Hulu is an excellent choice for its combination of on-demand content and live TV, even if its original shows aren’t that great. Technically, Hulu offline downloads are limited to higher-level plans, and it still lacks 4K content. Yet, the cost is on the lower side compared to its competitors whereas you will get on-demand content and live TV along with it. Further, the user interface is quite easy to navigate with the latest Hulu update for the user interface. Therefore, it includes in the top 10 video streaming services in 2020.

Calling Disney Plus as an essential streaming service currently feels a little preemptive, without a strategy to fill the well with new content, the service is going to run dry soon. The low price makes it one of the most affordable of all the available services. Further, you can watch your favourite Marvel movies, Skywalker Saga 4K and dozens of Disney classics that personally would give you nostalgic feeling, and is quite enough to keep you busy.

Apple TV is one of the best among top 10 video streaming services in 2020. It feels a bit like an afterthought; a set wave on an already market full of competition. Moreover, the usual strategy of Apple to bring out the best version of a product after it has had a chance to study the market and iterate elegantly, not quite translated its streaming server here.

There is nothing particularly wrong with Apple TV +, but not much right with it either, and it certainly has not the chops to replace anything currently on the market. Further, in a landscape like this, this may be the first we might have seen a great player who feels so good as a secondary subscription (or even tertiary).

Crunchyroll is an impressive streaming service because of its overwhelming size catalogue and reliable support for simulcast. It also has an exclusive series of original cartoons and a manga magazine. That said, it lacks offline downloads. Crunchyroll is one of the best-known names in the streaming space and for a good reason. It offers more than 1200 sets, many simulcast shows without advertisements. Note that it addresses explicitly to anime fans; if you want to watch cartoons and other entertainment, this is not the best service. Also, if you prefer dubs rather than subs, you will be disappointed that the vast majority of the library Crunchyroll has the latter one.

HBO Max is one among the top 10 video streaming services in 2020. It enters the competition with rich content- by far the most attractive quality. Launching with an impressive 10,000 hours of shows and movies, organized from a wide range of “hubs”, you will not be hanging around waiting for a new content to drop. With options to create multiple profiles, parental control, offline downloads and choice to watch on multiple screens simultaneously, it curated for home use.

Further, this is not a first broadcast video streaming service from HBO, after all: it follows the existing HBO Now and HBO Go While under the name HBO. Additionally, there is a lot of variety available. Consequently including the entire HBO catalogue, the DC Universe, TCM, Crunchyroll, Looney Tunes, Cartoon Network and Studio Ghibli.

Hotstar balance a mix of blockbuster entertainment (including the rights of popular movies and shows ABC, HBO and Showtime) with a content package aligned with India’s love for Bollywood and demand for local language translations. (Note that India welcomes hundreds of dialects and 20 official languages). Because of this winning combination, Hotstar dominates India video-on-demand streaming services market.

Iqiyi is also known as the Netflix of China and one among the top 10 video streaming services in 2020. Iqiyi was formerly known as Qiyi. It is an Online video Platform headquartered in Beijing, China. Presently, Iqiyi is the largest online video site. Further, they have a content of more than 6 billion-hours and have 500 million active users in China. They are an ad-supported TV and movie service portal media offers high-definition content.

Viki is the go-to streaming service for all those who love Asian drama shows and entertainment. It is packed with Chinese, Japanese, South Korean, and Taiwanese documentaries, movies and series. Additionally, the service has a large community approach which differentiates it from other options on the market for streaming services, with users making recommendations, translations, and more. The service offers new subscribers a free seven-day trial, hence it is in the top 10 video streaming services in 2020.

Amazon Prime subscription also includes among top 10 video streaming services in 2020. It depends on what you are looking for in a streaming service. If you are a big fan of movies (good, bad and everything else), a subscription might be useful for Prime video. As it has a vast catalogue of movies – especially if you can use it to replace expensive digital rentals. This could be one of the best video streaming services. The growing collection of the original content of the Amazon is also a big draw – especially because there are no ads in shows. Additionally, Prime Video offers a large number of 4K HDR content and it is a plus for those who own 4K TVs.

TOP10.DIGITAL has tried to curate a list of best streaming services available in the market. Though, it depends on the viewer which one they like. So stay tuned for more Top 10s like Top 10 Video Streaming Services in 2020 in the future.

Are you using Google Photos to store your media...
Read more
Previous article
NVIDIA Event 2020-Here Are All The Major Announcements
Next article
Litecoin Cryptocurrency-Here Is What You Need To Know
Top10 Editorhttp://Top10.Digital